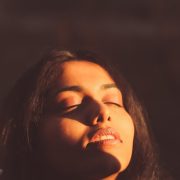 A Bible Study on the Book of Esther

Summer is here and the sun is shining. What about the sunshine do you enjoy (or perhaps don’t enjoy)?
Jesus is the light of the world, and He tasks His followers, believers, to shine His light to others (Matthew 5:14-16). What does it mean to shine?

Merriam-Webster Dictionary defines shine as: 1. To emit rays of light; 2. To be bright by reflection of light; 3. To be eminent, conspicuous, or distinguished; to perform extremely well; 4. To have a bright glowing appearance; 5. To be conspicuously evident or clear.

When Jesus calls us to shine it is because He wants us to be world changers. A beautiful example of someone who shone brightly and changed the world is Esther.

We probably know the story of Esther, but basically, King Xerxes banished his wife, Vashti, and he needed a new queen (Esther chapter 1). A beauty pageant was held to find the next queen.

Read Esther 2:2-4.
After 12 months of beauty treatments, Esther was able to go before the king and ultimately, she was chosen to be the queen of Persia. Yes, she was beautiful on the outside, but that is not what made her shine.

Haddasseh was her Jewish name; Esther is her Persian name. Esther’s name means “star,” and she shines brightly in dark circumstances; God used her dramatically to save the Jews. Let’s look at four “star” qualities that Esther had, that we too should have in our Christians lives, as we shine brightly for the Lord.

Read Esther 2:5-7.
⦁ What do we learn about Esther and Mordecai in these verses?

In these verses we see the first ray of light in a pagan, godless land. In chapter 1 we see scenes of wealth, pride, drunkenness and gluttony, betrayal, rage and conniving politicians. Then suddenly we meet the cousins Esther and Mordecai. They are Jews; they are God’s chosen people. We too, live in a dark, sin-filled, world, and today our world, our communities need the light of Christ.

⦁ What does Ephesians 5:8 challenges us to do?

Esther demonstrated faith in her God, no matter what she experienced. She was taken from her home, to live in the palace. Despite not being surrounded by other believers, and being surrounded by the life of the palace, nowhere do we see Esther compromise in her lifestyle. We don’t see her acting like the others

⦁ What did Esther not do?

⦁ Two times in these verses what does it say about how people responded to Esther (v. 9, 17)?

She won their favor; it wasn’t because of who she was, it was who she had shining in her and through her – the Lord. She is remaining distinct, and without revealing her Jewish identity, people see something different in her. She never panics when taken from her home, or when difficulty arises. She trusts in God and that is all she needs. Her faith in the Lord carries her through, and it is her faith in the Lord that helps with her next star quality.

⦁ How would you define courage?

Merriam-Webster Dictionary defines courage as “mental or moral strength to venture, persevere and withstand danger, fear, or difficulty. Bethany Hamilton, the professional surfer who lost an arm to a shark attack said, “Courage doesn’t mean you don’t get afraid. Courage means you don’t let fear stop you.”
Esther was such a woman. In chapter 3 we discover an evil plot – Haman wants to destroy all the Jews. In chapter 4 we see that Mordecai hears of this plot and is mourning. Esther hears of Mordecai’s distress, and she too becomes upset, and wants to know why Mordecai is so distraught.

⦁ What does Esther learn from Mordecai?

⦁ Why was Esther hesitant to act at first?

⦁ What was Mordecai’s wise words to Esther?

⦁ How did Esther act courageously?

This is a dark world, and bad things will happen, but we don’t need to be afraid. We have the Lord who journeys with us, and He has already defeated our enemy.

⦁ What does Peter tell us in 1 Peter 3:14-16 about facing difficulties?

I have read that there are 365 “fear nots” in the Bible – one for each day of the year. We need not fear anything or anyone, if we have God on our side. And the best way to shine the light of Christ, is not to be fearful when the world around us seems like it is spinning out of control. In her faith, Esther trusted God and knew that God was in control. Because of her faith, she had courage to act. Part of our shining as lights is having the wisdom to know when to act.

Esther demonstrates wisdom over and over again, by listening to Mordecai’s advice and guidance

⦁ What does the book of Proverbs tell us about listening to wise advice? Read Proverbs 12:15 and 13:20.

Esther’s wisdom comes through prayer. Esther didn’t panic in face of danger, and she didn’t rush ahead without thinking. She showed wisdom by waiting to act.

⦁ How long did Esther wait to act?

⦁ What had she been doing according to chapter 4 before she approached the king?

Prayer should always be our first response; not worrying. We can shine the spotlight on the Lord if we are people of prayer rather than people of panic.

⦁ What does Philippians 4:6 tell us to not do and to do?

So, this wise woman invites the King and Haman to a banquet, and then the king asks her what she wants.

⦁ How does Esther respond to the king’s question (Esther 5:7-8)?

In chapter 7 we see Esther holding the second banquet, and this time she acts and speaks up and tells the king what Haman is plotting.

⦁ This time when the King asks what Esther wants, how does Esther respond?

The king issues a second decree in Esther 8, allowing the Jews in every city the right to assemble and protect themselves. Through Esther’s wisdom, the Jews were spared, and God’s light was shone to a dark world.

Nowhere in 10 chapters of Esther’s story will you find anger or agitation, violence or panic, rashness or reaction. Esther knew that out-of-control emotions wouldn’t help her avert disaster. She chose gentle, persistent, persuasive and sweet speech.

⦁ What does Proverbs 13:3 say about our words?

Notice what words are not recorded about Esther; not once is she recorded as moaning and groaning or complaining about her situation.

⦁ What does Paul advise us to do as believers in Philippians 2:14-15?

God needs bright lights shining for Him in this dark world. Things aren’t any brighter than in Esther’s days. And God calls all of us to shine, to be a star – not a star that says “Look how great I am,” but a star that points others to God.

Jill Briscoe writes, “Have you ever looked at your particular situation and realized that God wants to use you on the stage of history in a way similar to the way He used Esther? People are dying in the darkness, and He wants to hang us up like stars at night to bring attention to the Light of the world – Jesus! What a sense of worth it brings us, to realize that like Esther we are center stage in God’s thinking… for just “such a time as this!’”

In closing pray this prayer of joyful surrender by Mother Teresa of Calcutta:
Dear Jesus, help me to spread your fragrance everywhere I go.
Flood my soul with your spirit and life.
Penetrate and possess my whole being so utterly that my life may only be a radiance of yours. Shine through me and be so in me that every soul I come in contact with
may feel your presence in my soul. Let them look up and see no longer me, but only Jesus. Amen.

She Leads…As a Team Player
Scroll to top