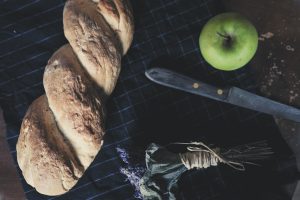 I love a good crispy apple. Growing up as a kid in the northwest, we had a couple of apple trees in our backyard, and I always looked forward to summer months, when I could grab a fresh apple off the tree and bite into it. Even now, I can hear, see, taste and smell the sensation that first bite delivered. I feel that way about most fruit. I also love a fresh, warm out of the oven slice of homemade bread. Again, the smell, taste and sight of that freshly baked goodness gives me all the good feels. During my time with God this morning, I partook of two different passages of Scripture that used the phrase, “their eyes were opened.” One passage involved a piece of fruit, the other a loaf of bread. God opened my eyes during this encounter with Him, and he stirred my heart. I love it when He does that.

If I could see Adam & Eve, face to face, I might look them straight in the eyes and say, “Why on earth did you partake of the fruit, when you were specifically told not to? Your choice to partake changed the trajectory of human existence. You could have made our lives so much easier if you had JUST SAID NO. And yet, here we are, a fallen world, because you used your freedom and went against the will of God. Thanks a lot, Adam Eve!” Genesis 3: 6 & 7 say, “The woman was convinced. She saw that the tree was beautiful and its fruit looked delicious, and she wanted the wisdom it would give her. So she took some of the fruit and ate it. Then she gave some to her husband, who was with her, and he ate it, too. At that moment their eyes were opened, and they suddenly felt shame at their nakedness.” In an instant, their eyes were painfully opened to the reality of guilt, separation, brokenness, unhealthy boundaries, failed relationships and every sin imaginable.

If I could sit with the two disciples who were with Jesus on the Road to Emmaus, and talk to them face to face, I would say to them, “What was it like to sit across from Jesus, and break bread with the Bread of Life? Tell me about the burning sensation you felt when He talked with you and opened the Scriptures to you. I think I’ve felt the same sensation. What was it like when your eyes were opened and you recognized Jesus, Messiah, Son of God, Risen Savior? Why do you think it is that you didn’t recognize Him on the road?” Luke 24: 30 & 31 say, “When he was at the table with them, he took bread, gave thanks, broke it and began to give it to them. Then their eyes were opened, and they recognized him.” As they partook of what Jesus offered them, they knew Him, and they realized that the conversation they had partaken in on the road was holy and heart stirring. Their encounter with the Bread of Life, opened their eyes to the reality of His existence and all that He offered. His presence brought peace, harmony, wholeness, fellowship, sanctity and restoration.

Two choices, and two eye-opening scenarios with completely different outcomes. We can probably relate to both scenarios and both outcomes. Pride – the same human pride Adam and Eve acted on, sometimes causes us to partake in sin, which God never planned for us to partake in. Pride leads us out of the will of God and into the tempter’s grip, where bondage can hold us tight. On the other hand, when we deliberately make time and space to sit in the presence of God and partake of all the Bread of Life has to offer us, we live in freedom and experience His all-consuming love that breaks the grip of sin.

Thankfully, God is love and He had a plan for Adam and Eve’s mess-up. He has an even better plan for our mess-ups. I don’t know about you; but I would much rather have my eyes opened like the two disciples, whose broken hearts were healed and burning within. Every minute of every day, I long to sit in His presence, break bread with the Bread of Life, and have my heart warmed by the fire of His Spirit and His word transforming me. I long to break bread with others, as well, and share and praise God with a glad and sincere heart. I’m growing daily, but I recognize that there are still times when my eyes are opened painfully, because of pride, and I have to seek forgiveness and restoration.

God, open my eyes to see you, every second of every day. Keep me humble so that pride doesn’t trip me up and cause me to fall. Not my will, but yours!

Note:  Also on our website is DON’T FORGET THE BREAD Bible study and SEASONAL DOUGH ORNAMENTS craft that coordinates with this devotional.

Book Review: “The Seven Spirits or What I Teach My Officers”