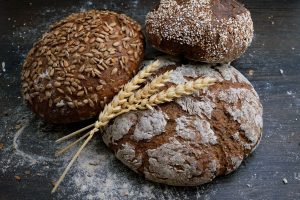 If you were to go into your kitchen or pantry, chances are you would find some sort of bread. Every culture in the world has some type of bread though it may take different shapes and forms sometimes baked and sometimes fried. We even have an expression in America, to live on bread and water is to survive on the bare minimum. Bread is considered a staple, a common element of people’s diet, a bare necessity. This isn’t new; when the Israelites were wondering in the desert God fed them with, you guessed it bread, not that it was any bread that we have seen before. Exodus 16:4 says: “Then the Lord said to Moses, ‘I will rain down bread from heaven for you…” (NIV). God sustained the Israelites with this bread from heaven for forty years.

Can you guess how many times that Hebrew word for bread, lechem, is found in the Old Testament?

Two hundred and ninety-six times. The Greek equivalent, artos, is found an additional ninety-seven times in the New Testament adding up to three hundred and ninety-three times those two words are used in the Bible. That’s a lot of bread. The Bible uses bread as not only a form of food or sustenance but also as a symbol to God’s people of remembrance and of Jesus.

Take a look at Exodus 25:30 a verse included in the instructions from God to Moses on how to build the Tabernacle or the sanctuary for the Lord specifically in God’s instructions on the gold table that was to be put there, what do you notice?

A symbol was to remain there at all times, the bread of the Presence. If you were to look at Leviticus 24:5-7 you would find a description of this bread. It was not a single loaf but was actually twelve loaves made of the finest flour and was to be arranged in two stacks of six and placed on the gold table next to pure incense as a memorial portion. This was a symbol. In verses 8 and 9 it says: “This bread is to be set out before the LORD regularly, Sabbath after Sabbath, on behalf of the Israelites, as a lasting covenant. It belongs to Aaron and his sons, who are to eat it in the sanctuary area, because it is a most holy part of their perpetual share of the food offerings presented to the LORD.”

This bread was considered holy by God, it was to remain in the sanctuary of God’s presence the tabernacle, and it was a symbol of God’s covenant, it was the bread of the Presence. It resided in the Holy place within the tabernacle next to the Ark of the Covenant. Hebrews 9:4 tells us that within that Ark was another symbol of bread. This one a sign of God’s provision. Remember the bread from heaven? Exodus 16:31-32 says: “The people of Israel called the bread manna. It was white like coriander seed and tasted like wafers made with honey. Moses said, ‘This is what the LORD has commanded: ‘Take an omer of manna and keep it for the generations to come, so they can see the bread I gave you to eat in the wilderness when I brought you out of Egypt.’’” Hebrews 9:4 tells us they kept this reminder in the Ark of the Covenant. Deuteronomy 8:3 tells us that this bread was also a lesson in God’s provision teaching the Israelites that “man does not live on bread alone but on every word that comes from the mouth of the LORD.”

Bread as a reminder was nothing new to the Israelites. When they fled Egypt they didn’t have time to allow their bread to rise so God commanded them to eat unleavened bread (bread with no yeast) for seven days straight every year as part of their Passover celebration, which was a remembrance of God’s deliverance. Deuteronomy 16:3 calls this unleavened bread the bread of affliction and states that it is to be a remembrance of their departure from Egypt. That is three different types of bread that are to be a reminder to the Israelites of God’s provision and covenant.

Have you ever watched a movie over and over again? If you do, the second and third and fortieth time you watch a film you will probably pick up on clues that the writers and directors put in the beginning of the film to prepare you for or hint at the ending. Clues you don’t notice the first time because you don’t know the ending so you can’t decipher what in the beginning is important and what is just filler to keep the story moving. God is the ultimate author and what I love about studying the Old Testament is that God is leading us to reconciliation. In the Old Testament God uses bread as a reminder of His covenant and as a reminder of His provision and has them place these reminders among the Holiest of Holiest places.

In the New Testament God uses bread as a symbol as well. In Matthew 4:2-4 when Jesus is tempted in His hunger to provide bread for himself, He quotes Deuteronomy 8:3, God provides. Again, in Matthew 6:11 as part of the Lord’s prayer Jesus instructs us to pray for God’s provision using bread as a symbol, as we are to pray: “Give us today our daily bread.” He demonstrates God’s provision through bread when He feeds the 5,000 (plus women and children) and then the 4,000 (plus women and children) with just a few pieces of bread and fish each time. Both times He gives thanks and then broke them into pieces until the whole crowd had been fed and basketsful of leftovers had been collected. An object lesson in God’s provision, which happened to use bread. Still somehow, they missed the reminder, they missed the point.

Jesus says that He is the bread of life, and that whoever goes to Him will never go hungry (vs. 35). He is the basic core sustenance that will cause us to never hunger. Then we have Jesus telling us to take bread as a reminder at the very end of His ministry. His last supper, on the day of Unleavened Bread (the bread of affliction), when Jesus and His disciples were eating the Passover meal Luke 22:9 tells us: “And he took bread, gave thanks and broke it, and gave it to them, saying, “This is my body given for you; do this in remembrance of me.”

He broke the bread of affliction and gave up His body for us. “…do this in remembrance of me.”

This brings us to Luke chapter 24. Two disciples walking down a road despairing over Jesus’ death and how that didn’t fit into the story they thought God had been writing. Jesus appears to them, but they were kept from recognizing Him. He goes on to walk them through all the clues God had left them that they had missed. All the things the prophets had spoken that they were slow to believe. Verses 30-31 say: “When He was at the table with them, He took bread, gave thanks, broke it and began to give it to them. Then their eyes were opened, and they recognized him, and he disappeared from their sight.”

“… do this in remembrance of me.” Does this encounter remind you of anything?

Jesus has risen! He has created a way for us to be reconciled with God! He has also left us with a beautiful reminder of His provision and His covenant.

Take a walk through your kitchen. Do you see any bread?

What an amazing daily reminder that Jesus is with us, that we can be reconciled to God if we so choose, that God provides. We get to choose, we can look in our kitchens and just concentrate on the mess, or the need to cook dinner, or the hunger in our stomach, essentially the cares of this world. Concentrate on the wrong things like those two disciples walking and talking, or we can see the bread in our pantry and be reminded of God’s provision, God’s covenant, and God’s presence. I can tell you I won’t be looking at bread the same going forward.

What difference in your daily walk would remembering God’s provision, covenant, and presence make?

Note:  Also on our website is FRUIT, BREAD & OPEN EYES devotional and DOUGH SEASONAL ORNAMENTS craft that coordinates with this Bible study.

Book Review: “Liturgy of the Ordinary”
Scroll to top