You are here: Home / Devotional / When Life Changes 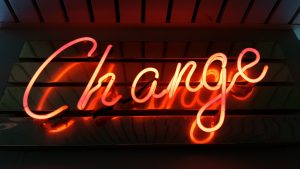 Change is inevitable! You decide whether you adapt! Change to the fearful is threatening because it means that things may get worse. To the hopeful it is encouraging because things may get better. To the confident it is inspiring because the challenge exists to make us stronger. Become a student of change. It is the only thing that will remain constant.

In Joshua 1:1-9, we see God’s chosen people – the Israelites – facing a lot of changes. First, there was a change in leadership. Verse 1 tells us that Moses is dead. Suddenly Joshua goes from second lieutenant to the man with primary responsibility, under God, to lead Israel into the Promised Land.

Secondly, there was a change in location. God commissioned Joshua to lead the children of Israel into the promised land. For 40 years the desert had been their home – and being nomads had been their lifestyle. Now, it was time to finally enter the long awaited Promised Land – a land that God would give to them, but it was still an unknown land – there were people to be conquered, there would be the adjustment to living “city” life, and settling down, rather than just wandering.
Joshua realized the seriousness of being Israel’s leader. All these changes seemed almost overwhelming, but God didn’t leave Joshua alone with this task, but provided him with three “tools” for Joshua to rely on for help – tools that each one of us can rely on when we go through changes in life.

I. Joshua relied on God’s presence.
The Lord reassured Joshua with the promise of His unfailing presence.

No one will be able to stand against you all the days of your life, as a I was with Moses, so I will be with you; I will never leave you nor forsake you. Have I not commanded you? Be strong and courageous. Do not be afraid; do not be discouraged, for the Lord your God will be with you wherever you go. Joshua 1:5, 9

This did not minimize the task Joshua faced; he would encounter giants and fortified cities, not to mention the difficulties of leading such a large group of people, but God’s presence would make all the difference. God’s enabling presence is assured. God is saying, “I will be with you to direct, sustain and assure success.” In essence God is saying, “I will not drop or abandon you.”

II. Joshua relied on God’s strength.
Three times in this passage, Joshua is told to be strong:

Strength and courage seem to go hand in hand. Mere physical strength was not enough for Joshua to conquer the Canaanites and claim the Promised Land. Trying to deal with all the changes on his own strength, Joshua’s task was doomed to failure; he would drown in the enormity of this task. Relying on one’s physical strength will eventually lead to exhaustion and failure.

Because of the Lord’s strength we can be courageous. The Hebrew word for “strong” refers to “sound legs,” while the one for “courage” refers to “having a secure grasp.” The point is clear: God was telling Joshua that his success as a leader depended on whether he could stand strong and hold on tightly!

III. Joshua relied on God’s Word.
It’s one thing to say to Joshua, “Be strong! Be very courageous!” and quite another thing to enable him to do it. Joshua’s strength and courage would come from the presence of the Lord and from meditating on God’s Law, believing its promises, and obeying what He said.

Be strong and very courageous. Be careful to obey all the law my servant Moses gave you; do not turn from it to the right or to the left, that you may be successful wherever you go. Keep this Book of the Law always on your lips; meditate on it day and night, so that you may be careful to do everything written in it. Then you will be prosperous and successful. Joshua 1:7-8

Joshua had to obey the commands and guidance God had given through His Law for Joshua to succeed in dealing with the changes that lay ahead The Lord’s Word had to be a part of Joshua’s daily life – it had to have impact. The same is true for us.

How does God’s Word become a part of our daily lives? Having a Bible that sits on a shelf and is opened only on Sunday mornings isn’t enough. Merely reading the Bible a few minutes a day isn’t enough. Making God’s Word a part of our lives requires time spent in reading and meditating on God’s Word. . Instead of filling your mind and heart with news and fear, fill it with God’s word instead.

We are all facing changes, but we can ride out the bumps that come from change if we rely on the same tools God gave Joshua: God’s presence, God’s strength and God’s Word.  Whatever changes lie ahead, you aren’t alone. God is there. You don’t have to rely on your own strength – depend on the Lord’s strength. With whatever changes that come, turn to the Bible for His guidance, comfort and reassurance.

Handling the “What Ifs” of Life
Scroll to top