You are here: Home / Hollow Bunnies 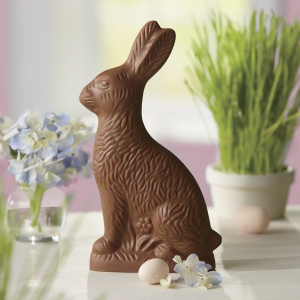 As I walked through the largely empty shelves of local grocery stores this week, I was struck by the large number of chocolate Easter bunnies that were still on display. It got me wondering how the Easter Bunny (the big guy) got his job delivering colorful eggs in the first place, and what, if anything, a rabbit has to do with the Church and Christ’s resurrection.

It turns out that the ancient Greeks thought rabbits could reproduce as virgins. This superstition persisted until early medieval times, when the rabbit became associated with the Virgin Mary.  Later, rabbits began appearing in manuscripts and paintings, serving essentially as a symbol of virginity.

The Easter Bunny was first popularized as a symbol of the spring by German Protestants. They were most likely the ones to invent the myth of the Easter Bunny for children.  The “Easter Hare” was identified as a kind of judge, evaluating whether children had been good or bad.   According to tradition, the Easter Hare would lay colorful eggs as a symbol of new life.  Eventually, all of this came with German immigrants to the American colonies during the 18th century.

The association between bunnies and chocolate also originated in Germany. It gained mass appeal in America in the last decade of the 19th century, when American shop owner Robert Stohecker created a five-foot-tall chocolate bunny as an Easter promotion for his drug store. Today, approximately 90 million chocolate Easter bunnies are produced annually around the world.

I distinctly remember the first time I ate a chocolate bunny. I wasn’t aware of any of this history, of course. I was simply enthralled by the idea of biting into a thick, delicious piece of chocolate. So I settled down on the sofa and excitedly ripped open the package. I took my first bite (the ear, of course) and was instantly disappointed. It was hollow! What a cheat! The bunny promised so much, and yet delivered so little.

Sadly, many people live their lives just like that. The author Tahereh Mafi wrote: “It’s strange, how hollow I feel. Like there might be echoes inside of me. Like I’m one of those chocolate rabbits they used to sell around Easter, the ones that were nothing more than a sweet shell encapsulating a world of nothing. I’m like that. I encapsulate a world of nothing.”

According to Forbes, 84 percent of people across the U.S. will take part in Easter festivities this year. But countless people are depressed, disappointed by life, and feel both empty and hopeless.  Even many who celebrate Easter as the occasion of Christ’s resurrection fail to experience the joy and hope that He offers. Just like the hollow bunny.

But it doesn’t have to be like that. The Apostle Peter wrote, “Let us give thanks to the God and Father of our Lord Jesus Christ! Because of his great mercy he gave us new life by raising Jesus Christ from death. This fills us with a living hope.” (1 Peter 1:3)

We don’t need to be unsatisfied with life like a hollow bunny. If you’re feeling empty, just open yourself to all of God’s goodness this Easter. His love is rich and full and satisfying. You won’t be disappointed. In fact, the feeling you get when you embrace the full reality of Christ and His victory over death . . . is delicious.

When Life Changes
Scroll to top