The Difference Between Religion & Spirituality & the Role of Each – PODCAST

You are here: Home / The Difference Between Religion & Spirituality & the Role of...

it’s human nature to believe in something other than one’s self, and doing so can give life meaning.

That according to Dr. Diane Winston, who has made understanding, analyzing and writing about religion in America her career.

Now as the Knight Chair in Media and Religion at the University of Southern California, Diane is a national authority on religion and the media as both a journalist and scholar. Her courses examine religion, spirituality and ethics in relationship to journalism, entertainment media, American history and foreign policy.

She holds a doctorate in religion from Princeton University along with master’s degrees from Harvard Divinity School, the Columbia University Graduate School of Journalism and Brandeis University.

As she explains on today’s show, Religion—like politics, economics, race, ethnicity and gender—is a cultural factor and social force that motivates, explains and inspires. It is key to understanding the world we live in.

And you can’t have religion without spirituality, and vice versa. 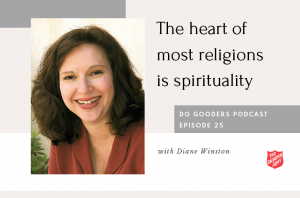 Good words from Dr. Diane Winston in this show:

More information about this podcast can be found at caringmagazine.org

Go Backstage on Songwriting in Ministry – PODCAST
Scroll to top