Blog - Latest News
You are here: Home / Do You Recognize Him? 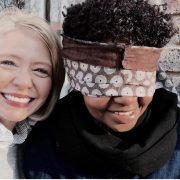 Happy Spring! I have enjoyed being back in a place where I can anticipate seasons as I remember. In South Africa the seasons are reversed, and I remember my first Easter in 2016 thinking it was odd to be in March watching trees arrayed with bright fall colors, leaves covering the ground and the hint of fall. I wasn’t looking for earth preparing for winter. I was looking for new birth of flowering trees, tulips, and daffodils. I enjoyed the seasons in my new surroundings, but I had to stop and think about my expectations especially around Easter.

The photo shared in this blog is a picture of myself and a woman I met at a retreat during my first fall season of Easter. We were playing a game where one person was blindfolded and the other used only their voice to guide their partner through a very difficult obstacle course. I thought over the years of being in youth work I had played just about every game but this one was different. We were strangers and had been paired up as partners. We each had a turn at being the one blindfolded and the one leading, giving instructions to go left, right or exclaiming, “Be careful there are steps to climb!” The game, of course, was about listening, trusting, and believing something and someone you couldn’t see.

The real difficulty came when 20 other women were giving similar instructions. My partner was trying to listen for a voice from a person she had just met. She didn’t recognize my voice because she didn’t know me, but I kept calling her name. I tried to lean in as close as I could without touching her in order to guide her so she would feel safe. As the game continued, I could see her confidence and trust build as she began recognizing my voice and following my commands amongst the noise around her. At the end of the course there was relief and a feeling of accomplishment as the blindfold was removed, our eyes locked and she exclaimed, “There you are, I recognize you now!’

There are over ten separate accounts where Jesus made His appearance known on the road to Emmaus. The Disciples saw a pilgrim and didn’t recognize Him at first. Then his hands broke bread just as they would have seen Him do time after time and they knew him immediately.

At the time of resurrection, when the tomb was rolled away Jesus first appeared to a woman whose name was Mary Magdalene. She would have just endured the hardest night of her life. She sees Him but mistakes him as a gardener. John 20:14 “At this, she turned around and saw Jesus standing there, but she did not realize that it was Jesus.” Mary Magdalene turned around and saw Him standing there but thought him to be the gardener. She doesn’t recognize Jesus at first, but Jesus certainly recognized her. Then something happened when he called her by name. The intimacy of knowing her name is enough to bring her out of her grief and she recognizes, it’s Jesus.

Scripture tells us she had been the one who was released from her bondage of Satan’s demons by Jesus himself. No wonder there was such great love and care for him, as she had experienced up close and personal his saving grace. Her life reminds us that Jesus offers us total deliverance from the bondage of our past. Mary had an important part to play that night, and all would be revealed.

Do you recognize Jesus today? Are you following his voice even though you can’t seem to find your way out of a hard season? The same God who was raised from the dead, who appeared in the flesh, is the same God who will raise you from the grave and will empty your tomb. Perhaps today it’s a tomb of loneliness, doubt, and fear. God called Mary’s name in the midst of her confusion and grief. Isaiah 43:1 is a reminder that he knows us! “Do not fear, for I have redeemed you. I have called you by name, you are mine.” As we continue to embrace this Lenten season and the earth breaks forth spring, let’s walk in the assurance that He is our great Shepherd who leads us so that we may walk in confidence of who we are in Him.