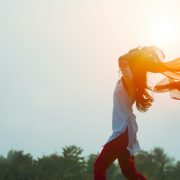 INTRODUCTION: One of my favorite holidays is the Fourth of July. It is a day filled with picnics in the park in the presence of friends and family, games, half melted ice cream and of course the spectacular fireworks display that fil the sky with a multitude of colors. However, those are not my favorite parts of this day- I love to celebrate that our country is free. We have freedom of speech, assembly, the press, and most of all freedom to worship our God openly and without fear of imprisonment – or even death.

As Americans, we are a free people, but as Christians we even more free. Through the sacrifice of His Son Jesus, God gives us a freedom that is even greater than the freedoms we enjoy in the United States. In John’s Gospel chapter 8: 31-47, Jesus tells the Jews who believed He was God’s Son about what it means to be a free child of God.

31 “So Jesus was saying to those Jews who had believed Him ‘If you continue in My word, then you are disciples of Mine.
32 and you will know the truth and the truth will make you free’”
33 “They answered Him, ‘We are Abraham’s descendants, and have never yet been enslaved to anyone; how is it you say You will become free?’”
34 “Jesus answered them, ‘Truly, truly I say to you, everyone who commits sin is the slave of sin
35 ‘The slave does not remain at the house forever, but the son does remain forever’
36 “So of the Son makes you free, you will be free indeed’”

Jesus Himself is the Truth- this is because He is the source of truth. He is the only sinless person that ever walked this earth, so He is the standard of righteousness. He frees us from the consequences of sin. When we put our faith in Him and believe in what He did for us at Calvary, we are forgiven; we don’t have to worry about going to Hell – or that God’s going to “get us”. To have this gift of freedom in Christ is not rocket science, but a simple act of faith and trust. We don’t have to pass any tests or perform any physical feats, like some religions require. John 14: 6 tells us that Jesus is the Way, the truth, and the life. He is, in fact, the only way to God

Why do some people find it hard to believe that Jesus can truly make us free?

Why are many people not convinced that Jesus is the Truth- the only way to God the Father and chase false paths?

In verse 33, the Jews Jesus was addressing spoke of being Abraham’s seed and how that they had never been enslaved by any man. That is not exactly true- their ancestors had been in bondage to the Egyptians and the Babylonians, and at that moment, they were living under the tyranny of Rome. They were not a free people physically or spiritually. They claimed to be Abraham’s descendants, but they were reluctant to accept Jesus as the Messiah.

In verse 34, Jesus told them that everyone who commits sin is the slave of sin and that slaves do not remain in the house forever, but that sons do.

What did Jesus mean by that last statement?

Sin has a way of controlling us; it dominates our lives and dictates what we do or don’t do. However, if we allow Him, Jesus can break the chains; and help us to practice righteousness then we become true children of God.

Think about a time when you were enslaved by sin. What was your life like? What changed when you made a decision for Jesus?

John 8:37 “‘I know that you are Abraham’s descendants; yet you seek to kill me, because My Word has no place in you”
38 “I speak the things which I have seen with My Father; therefore you also do the tings which you heard from your father”
39 “They answered and said to Him ‘Abraham is our father’ Jesus said to them ‘If you Abraham’s children, do the deeds of Abraham’
40 ‘But as it is, you are seeking to kill Me, a man who has told you the truth, which I heard from God; this Abraham did not do”
41’You are doing the deeds of your father’. They said to Him, ‘We were not born of fornication, we have one Father: God.’
42 Jesus said to them, ‘If God were your Father, you would love Me, for I proceeded forth and have come from God, for I have not come on My own initiative, but He sent me’
43 ‘Why do you not understand what I am saying? It is because you cannot hear My word”
44 ‘You are of your father the devil. And you want to do the desires of your father. He was a murderer from the beginning, and does not stand for the truth because there is no truth in him. Whenever he speaks a lie, he speaks from his own nature, for he is a liar and the father of lies’
45 But because I speak the truth, you do not believe Me’
46 ‘Which one of you convicts Me of sin? If I speak truth, why do you not believe Me?
47 ‘He who is of God hears the words of God. For this reason you do not hear them because you are not of God’”

Jesus spoke some very powerful words in that last passage. The religious leaders were unable to understand what Jesus saying because they refused to listen. This refusal to listen played right into Satan’s hands – he used their pride and prejudices to keep them from taking Jesus’ words to heart.

How does Satan keep you from listening to Jesus? Or does he. Explain how or how not.

These leaders were clearly followers of the devil. More than likely, they didn’t realize this as they were so convinced that they were right and Jesus was wrong.

Can you think of any examples of this in today’s world?

Those who serve Satan can not be children of God. Read I John 5:1

Jesus can tell people the truth and there will be those who refuse to believe. Those people are not free; they are in bondage just as much as if they were bound and shackled. However, those who listen to Jesus and take His words to heart have they gift of freedom. This gift is not dependent on what country they live in, but on their faith in Jesus and willingness to let Him be Lord of their lives.

July Devotional: The Battle Continues… But We Are Not Alone
Scroll to top