As White As the First Winter Snow

You are here: Home / Devotional / As White As the First Winter Snow 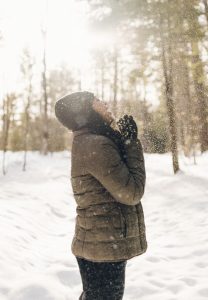 “Come now, let us settle the matter,” says the Lord. “Though your sins are like scarlet, they shall be as white as snow; though they are red as crimson, they shall be like wool. Isaiah 1:18

As a child, I didn’t like when my mom would say, “Kids, who wants to go play in the snow?” I was always the first one to say, “No Way!” Immediately my little sister would yell, “Yes!” She loved everything about going to the snow. To me it was nothing but a mess, because every time we went, I would come home filthy and muddy. You see, we lived many miles away from the snow and it took a few hours to get there. Most of the time we wouldn’t even make it there until most of the snow was melted away. All that was left behind was filth and mud. My thought was always, “who wants to play in that mess?” I would wonder why we couldn’t go when the first snow drops because that’s when it is so beautiful, so white and fun to play with.

When I became an adult and after years of chaos, my life was a mess, full of filth and mud. I wanted to change, but I didn’t understand how, or even where to start. I had such a hard time facing God because I believed if He only knew all the sin that surrounded me, He wouldn’t want me. I felt just like I felt anytime we went to the snow, like I was that filthy, muddy mess! I remember watching amazing Godly women, asking myself, “How can I be like them?”

As my faith grew, my understanding started to change. An amazing woman helped me realize that I didn’t have to wait to get rid of the filth and mud to come to Jesus. I just had to come, surrender, and confess my sins. God would make my filth and mud as white as the first winter snow. In Isaiah, the Lord says, “Come now, let us settle the matter,” says the Lord. “Though your sins are like scarlet, they shall be as white as snow; though they are red as crimson, they shall be like wool” (Isaiah 1:18).

In this passage of Isaiah, God comes to us, His Children, making the first move. God is inviting us to come to Him and settle the matter of the sin in our lives. This passage was written so long ago about people whose acts were considered “filthy and muddy”. God was trying to show them that their dirty condition was of their own doing and that they needed to repent, turn away, and live a life of true obedience. This is still true for us today: “If we confess our sins, he is faithful and just and will forgive us our sins and purify us from all unrighteousness” (1 John 1:9). God’s glorious invitation is to come to Him, realizing and admitting our need for His work of grace and mercy in our lives. When we come to Him with a heart open confessing our need of a Savior and our need to be clean, He will cleanse us as “white as the first Winter Snow.”

The reality is all of humanity needs Jesus. Pretending like we are sinless, is just a lie we tell ourselves. It is a lie that will keep us filthy and muddy. We have a God who makes the first move, who no longer see’s our filth and mud. We have a God who isn’t controlling or demanding. We have a God who is rational, reasonable, and right in His approach to have a people who want to live a life that is as beautiful as “white as the first Winter Snow.” “Come now, let us settle the matter,” says the Lord.

Note: Also on our website is a WHITE AS SNOW Bible Study and a SNOWY WINTER DAY LAYERED HOT COCOA MIX  craft that coordinates with this devotional.