Blog - Latest News
You are here: Home / She Leads…With Courage 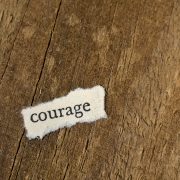 For the Spirit God gave us does not make us timid, but gives us power, love and self-discipline.
2 Timothy 1:7 (NIV)

When I think of powerful women leaders in the Bible, I cannot help but think of Esther. Esther was used by God to save a nation. In a time when women were not leaders and when her ethnicity was frowned upon, she stepped up. She was an orphan that became Queen of Persia and then in obedient courage she was used to save her people. I can imagine how scary this situation must have been for her but despite that she did not waver.

In my own life I have seen courageous leadership in my mom, Vicki Roberts. My parents are retired Majors for The Salvation Army. My mom has suffered from kidney cancer, heart issues and she had a stroke. She has had years of being in and out of the hospitals and has faced some extremely tough times physically. This is enough to turn anyone anxious and fearful. She has amazed me with her strength and spirit to do all she can until the Lord takes her home. Even in the hospital when things were uncertain, she was witnessing for the Lord and praying for the nurses. As she was house bound for the past few years, she has made it a point to not stop her ministry. She joins as many Salvation Army Livestream Worship Services possible from home. She began a Zoom Bible Study and daily uses her cell phone to lift others up and point them to Christ. Her leadership never stopped! Her ministry didn’t retire! Her zeal for the Lord has only increased! What an incredible example.

This past year and a half have been difficult for many of us. In the face of the unknown with the pandemic I personally faced a time of anxiety. This surprised me as I have generally been confident and strong. I had times of struggle. I honestly wanted to stay home and felt like shutting down. I knew this was not possible nor was it Gods will. I needed to lead and there were so many that needed help. I knew that in my ministry, and in my life, that I had the only, true, hope that could transcend the fear and anxiety that I (and millions of others around the world) was feeling. Like Esther, I had to walk into a situation, daily, that was full of unknowns (which was, and is, totally against my nature). I had to trust God and push through the anxiety because our employees, our congregation, and our community needed the hope that only Christ can bring. It took me being intentional in my personal walk with the Lord and I really learned to walk by faith in God and not by sight.

Through the years I witnessed that the courage that comes from the Lord is powerful. When I have had to walk through a door in the hospital to pray with someone who was dying, when I have taken the step to stand in the gap for the person who could not stand for themselves, when I have had to love someone that is angry and broken, when I had to walk through the doors of our corps despite the fear…God’s presence was evident and His strength sustaining. As I embrace a new appointment and walk into unknown areas, I have a choice to make as a leader. Being a leader can be hard but the beauty of relying on the Lords strength in the storms is empowering and beautiful.

I am so encouraged every time I think of Esther. She was a young Hebrew girl who was taken captive (along with her people) and trust into a situation where she had to abandon herself, entirely, into the hands of God…not knowing what would happen to her. All she knew about God was the testimonies of His work in the lives of those men and women of Israel who came before her time, and their declarations of His faithfulness to them.

Have I not commanded you? Be strong and courageous. Do not be afraid; do not be discouraged, for the Lord your God will be with you wherever you go. Joshua 1:9 (NIV)

We are on this amazing journey as leaders and how incredible is it that we get to do this! He will sustain us and fill us with power and strength as we minister for Him and lead in courage.

She Leads… by Seeing & Seizing the Day
Scroll to top