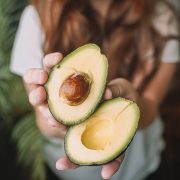 Everyone has favorite foods, and I am no exception. I love avocados! But I had really only been exposed to one type of avocado my entire life. Spending nearly all of my 52 years on the West Coast, I was familiar with the Haas avocado. To be honest, I hadn’t even considered the fact there may be other types of avocados to choose from!

Two years ago, I moved to Hawaii. That has been an adventure in and of itself! I am surrounded by plant and animal life I had never been exposed to before, and it has been quite the project to learn all about these beautiful creations so new to me. One of the things I have had to learn more about – Avocados!
There is a large and very old avocado tree in my backyard. However, the avocados growing on it are very different that what I am used to. This tree grows Dominican avocados, most commonly found in Florida. Unlike Haas avocados, when Dominicans are fully ripe, they do not fit nicely in the palm of your hand. They grow so large they take tow hands to hold. They are HUGE, and it takes skill to harvest them off the tree, because one wrong move means you will get whacked in the head with a heavy piece of fruit! When Haas avocados are too soft to the touch, that is a sign they are rotting. However, Dominican avocados need to be soft to the touch. If you try to cut one open before that point, all you find inside is rock hard fruit that can’t be used.

It may seem strange I would invest so much time in trying to understand more about avocados, but when I realized what was growing on the tree was different than what I was accustomed to, I had to start doing some learning!

I think it is human nature to gravitate toward what is familiar, and what we already know to be true. There is often comfort in “knowing what we know.” The downside to that, however, is when we are too comfortable in our knowledge, we are often unwilling to consider there may be more information we need to take into account. This is especially true when we are learning God’s Word and working to apply it to our lives.

When I was in college, I moved to the city of Seattle. I was a Salvation Army Officer’s kid who had moved around a lot, but never in my life had I lived somewhere so big! The Corps I attended was at least four times larger than the last one I had attended before leaving home, and the congregation was so diverse! It was all an enormous adjustment. For the first time in my life, I was being exposed to various viewpoints and opinions I had never heard before. I remember being in some sort of friendly debate with other young adults in the Corps about a Biblical concept. Someone in the group said something to the effect of, “I was taught to believe this way.” Another said something about the importance of Church traditions. I eventually said something like, “I was always told to do it like this.” One of the Corps Officers who had been standing by listening to us, popped his head into the group, smiled, and said, “But what does the Bible say about it?”

That was a wakeup call for me! After some reflection, I realized I had been basing my entire belief system on what I had always heard and was guilty of not really studying the Bible for myself. Perhaps what I had always believed to be true was correct, but how would I truly know until I compared it against God’s Word?

Recently, I was looking at the Sermon on the Mount in Matthew 5. It is one of the most basic and easy to understand sermons Jesus ever taught. It is a sermon I had heard and read so many times, I admittedly had started just “speed reading” through it rather than taking the time to reflect on each word.

This time when I read, I tried to really focus on what Jesus was saying, and you know what? There were some important things I had been missing!

First of all, I was reminded Jesus was talking to a large group of mostly Jewish people who had grown up hearing the law of Moses and the Ten Commandments. He knew they had most likely been basing their beliefs on what they had always been taught about the law, rather than learning the law itself. Jesus made sure they understood the purpose of His teaching about the law, when in Matthew 5:17 He says, “Don’t misunderstand why I have come. I did not come to abolish the law of Moses or the writings of the prophets. No, I came to accomplish their purpose.” He then went on to challenge their understanding of what God taught through Moses.

As Jesus preached, he would begin by saying, “You have heard.” You can see this beginning in Matthew 5:21. Basically, Jesus was saying, “You may think you understand what the law is about, but there is so much more you need to know!” He would then immediately follow the statement, “You have heard” with “But I say.” He pointed His listeners to God’s true intent of the law, and covered areas of life such as anger, family life and marriage, making promises, revenge, and how to deal with our enemies.

Matthew Chapter 5 ends with words from Jesus about how to apply God’s law in our interaction with those we see as our enemies. In Matthew 5:43-45 Jesus said, “You have heard the law that says, ‘Love your neighbor’ and hate your enemy. But I say, Love your enemies! Pray for those who persecute you! In that way, you will be acting as true children of your Father in heaven. For he gives his sunlight to both the evil and the good, and he sends rain on the just and unjust alike.”

In today’s deeply troubled world, we are almost encouraged to be divided and live-in opposition with one another. But that isn’t what Jesus taught us to do. He taught us a better way, and that is to reflect His pure love in the way we interact with our enemies. This can’t be a phony or half-hearted kindness. Jesus says we are to pray for them, and sincerely ask God to work in their lives. We are to show true and intentional love toward them. This is they way God requires us to live.

Jesus taught it wasn’t enough to show up in Church regularly so we can know ABOUT God’s Word. Jesus taught it was vital we know God’s Word so intimately that we LIVE it! The only way to make that a reality is to be active students of His Word, asking God to help it take root in our heart so it will change the way we live.

“For I can testify about them that they are zealous for God, but their zeal is not based on knowledge.” Romans 10:2

Let’s all vow to become committed students of God’s Word, and let it plant deep in our hearts!

September 2022 Bible Study: Everything I Needed to Know I Learned in Sunday...
Scroll to top