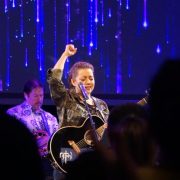 And we know that in all things God works for the good of those who love him, who have been called according to his purpose. Romans 8:28

This is the scripture that my youngest daughter, McKenna, used in her first testimony at our church when she was diagnosed with Non-Hodgkin’s Large B-Cell Lymphoma cancer in July of 2020. She shared in her testimony that she sat in disbelief for a moment and asked God, “Why me?” But then she heard Him say, “Why not you?” As a 26-year-old flight attendant and licensed private pilot, God was calling McKenna to have confidence that He was faithful to His promise in Romans 8:28 and requiring that she would trust Him completely with the six rounds of 120-hour chemo treatments that she would soon endure.

The treatments began in the middle of the Covid-19 pandemic when health care facilities were implementing “no visitor” policies. McKenna would need to remain in the hospital for five days at a time, just her and God. She expressed that some days were literally so difficult that she had to close her eyes and imagine Jesus sitting at the edge of her hospital bed or rubbing her back when she needed it most. She acknowledged that it was God who got her through every single day, one day at a time. McKenna also shared a quote in her testimony that stated, “Maybe you were assigned this mountain to show others that it can be moved.” And it couldn’t be any truer she said, because after all, faith can move mountains.

God healed McKenna halfway through her treatment in October of 2020. The softball sized cancer that was located near her heart had vanished. Simultaneously, in His strength, McKenna also obtained her instrument pilot’s license. And in her second testimony at our church she humbly declared, “God did that.” Her prayer was that her life would be used as a living testimony for His glory.

McKenna was advised to complete the second half of her chemo treatments and was now working on her commercial pilot license. It was on July 26, 2021, that my whole world literally changed in an instant. McKenna went on an exploratory flight while on a trip to Alaska. She was a passenger on a single-engine Cessna that tragically crashed in a steep mountainous area of upper Eagle River Valley. We were informed that her journey soaring the skies disconcertingly came to an end, McKenna had been promoted to glory. My heart broke and shattered into a million pieces. How could God allow this to happen?

The Coronavirus disease struck my family shortly after McKenna’s passing which caused my oldest daughter, Taurie, to be admitted in the hospital. As if Covid wasn’t enough to conquer, Taurie was also diagnosed with pneumonia. I found myself once again, in the middle of a pandemic, with another daughter in the hospital. For seven days Taurie fought to get better, while I wrestled with God, begging Him not to take her from my family. She was a wife, and a mother to three young boys. In all the 20 years I served God, there had always been weapons thrown at my family. None quite as sharp as death, and now sickness. How do I flourish in a dark season such as this?

God knew beforehand that these afflictions were heading my way, and in His kindness, guided me to places and people where I would be supported and loved, and able to thrive amidst adversity. The Salvation Army was one of those places. He surrounded me with an army of prayer warriors who prayed fervently, gave generously, and loved extravagantly.

By God’s grace, He sustained me. I eventually realized that lovers of God are not excluded from tragedy and even though I did not comprehend everything I was going through, I needed to trust the teacher. God instructed me to seek His perspective and revealed to me that His purpose was greater than my pain. He educated me about how He could use storms to sift my faith so that particles of unbelief would fall out. God conveyed to me that what I cultivated in tears would give rise to an abundant harvest. That He would use my suffering for His glory, and that He would come through.

Taste and see that the Lord is good; blessed is the one who takes refuge in him. Psalm 34:8

Taurie recovered from Covid and pneumonia and returned safely home to her family. My God is good indeed.

He is life. Although I faced the devastation of losing McKenna, I have grasped that this earth was not her final destination.

Jesus said to her, “I am the resurrection and the life. The one who believes in me will live, even though they die.” John 11:25

There is an eternal hope because Christ’s resurrection power has the final say. In eternity, death doesn’t win, Jesus does. McKenna is alive in Heaven, and her testimony will live for His glory. Is she a world changer? God knows.

When I focus my life from the standpoint of Truth, it is only then that I can flourish. I have learned that Jesus doesn’t want to be explained away, He just wants to be invited in. He doesn’t ask me to be perfect, just perfectly surrendered to Him. In this valley, and complementary to McKenna’s prayer, God has been providing me the opportunity to display His glory. When I am weak HE IS STRONG. In Truth I can be set free and remain unwavering in my faith.

Behold I have refined you, but not with silver; I have tested you in the furnace of affliction. Isaiah 48:10

There are days that I wake up and wish that this season was all a bad dream, and there are days that I sit to pray and have no words. In the stillness, nothing but anguish. Then God breaks through the silence and whispers that He has not dropped the pen that He is using to write my testimony. He advises me that when the pen remains in HIs hand, my testimony remains perfect.

After you have suffered for a little while, the God of all grace, who called you to His eternal glory in Christ, will Himself perfect, confirm, strengthen and establish you. 1 Peter 5:10

Heaven knows that I would rather have my circumstances be changed, but I know that right now, God wants to focus on changing me.

I can do all things through Christ who strengthens me. Philippians 4:13

Flourishing in the Valley Season
Scroll to top